Interpretive text
[ARTIST BIO] Pamela See (also known as Xue Mei-leng) is a second-generation Chinese-Australian papercutting artist born in Brisbane in 1979, where she currently lives and works. She completed a Bachelor of Visual Arts at the Griffith University’s Queensland College of Art (QCA) in 1999 and has exhibited and been commissioned nationally and internationally. Residencies include several locations in China and the United States. See is a former Artistic Director/Coordinator of the Mackay Festival of Arts, a potion held while residing in Mackay in the early 2000s. She is currently undertaking a PhD at QCA. In addition to exhibitions in the US and China, the artist has exhibited extensively in major Australian institutions, with works being held in the National Gallery of Australia, National Portrait Gallery, Museum of Brisbane, Art Gallery of South Australia, and several Queensland regional art collections including Artspace Mackay.

[INTERPRETIVE TEXT] Informed by her knowledge of Mackay’s history and applying traditional Chinese papercutting techniques, the work holds special relevance for this region’s audiences as well as nationally and internationally. The book’s cover is a silhouette-cutting portrait of John Mackay (1839-1914), the Scottish explorer and slave trader who was integral to the foundation and naming of Mackay. See was drawn to the story of Mackay traveling to China in search of cheap ‘coolie’ labour in 1865, and then turning to the South Pacific when blackbirding (coercing potential labourers to board the ship) in this region became the more profitable option. In Mackay, the Chinese papercutting technique meets silhouette-style imagery, a format in vogue during the peak decades of the Mackay sugar industry’s indentured labour and slave trade. Other pages of the book depict the outlines of labourers in sugar cane fields, a ship, and figures being captured in giant migratory birds’ beaks. The second element to the work is a loose papercutting to be displayed on a wall (resting on pins) above the book, in which the silhouette of a large bird in flight holds the small outlined figure of a person in its beak. The artist’s self-made paper of choice also communicates about the history of blackbirding and slavery—a cotton rag paper to reference North American slavery in the cotton fields; and incorporating bagasse (sugar cane crushed fibres) into the paper for the closer, more local history of slavery in the sugar cane fields. 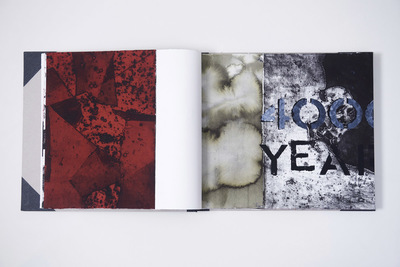 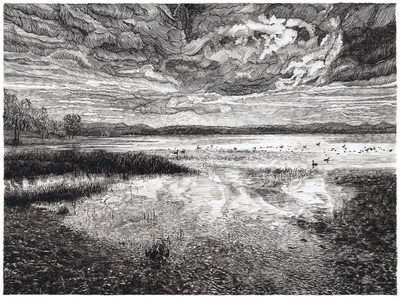